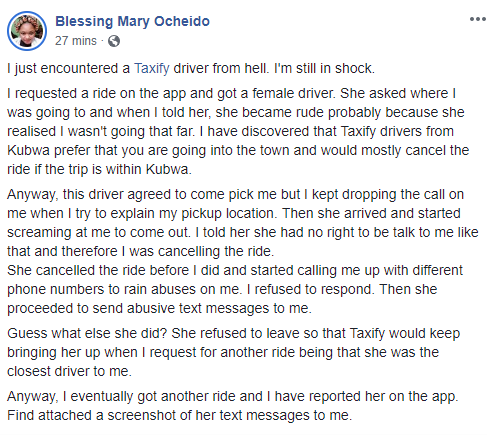 A Taxify customer has narrated the shocking encounter she had with a rude female Taxify driver today in Abuja.
Blessing Mary Ocheido, an activist for people living with disability in Nigeria, told of how she requested a ride on Taxify and the driver assigned to her was female. According to Blessing, the woman was rude from the get-go and things only got worse when she arrived at the pickup location.
The customer said the driver began to shout at her when she got to her location then cancelled the ride when things escalated between them. After cancelling the ride by herself, the driver refused to leave the location in order to see to it that the customer doesn't get another ride.
After some time, she sent a very rude text message to Blessing, which has now been shared on social media.
Sharing the story to Facebook, Blessing wrote:

I just encountered a Taxify driver from hell. I'm still in shock.
I requested a ride on the app and got a female driver. She asked where I was going to and when I told her, she became rude probably because she realised I wasn't going that far. I have discovered that Taxify drivers from Kubwa prefer that you are going into the town and would mostly cancel the ride if the trip is within Kubwa.
Anyway, this driver agreed to come pick me but I kept dropping the call on me when I try to explain my pickup location. Then she arrived and started screaming at me to come out. I told her she had no right to be talk to me like that and therefore I was cancelling the ride.
She cancelled the ride before I did and started calling me up with different phone numbers to rain abuses on me. I refused to respond. Then she proceeded to send abusive text messages to me.
Guess what else she did? She refused to leave so that Taxify would keep bringing her up when I request for another ride being that she was the closest driver to me.
Anyway, I eventually got another ride and I have reported her on the app. Find attached a screenshot of her text messages to me. 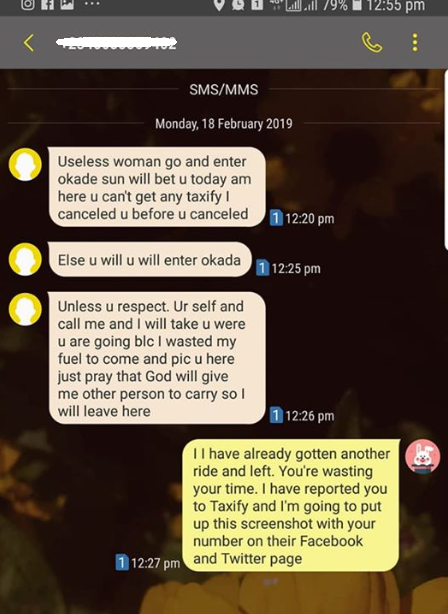 at February 18, 2019
Email ThisBlogThis!Share to TwitterShare to FacebookShare to Pinterest